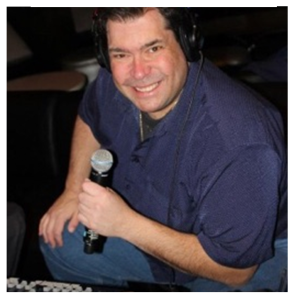 Dino first got bit by the radio bug Christmas 1974. His Dad, George Gatsoulas hosted a Greek language radio program in Providence, Rhode Island on radio station 1450 AM WKRI. Dino often went with his dad to the radio station and followed the station engineer around and was fascinated by the wires¸ knobs, bright glowing tubes, but mostly the gears behind the reel to reel decks!

After inspecting everything with the engineer his dad asked him to come to the control room, sit on his lap and say “Merry Christmas” in Greek (Kala Xrystougena) when the red light came on. The next day at church Dino got many compliments for his inaugural broadcast. That’s all it took for Dino to get hooked and pursue radio!

Dino taught himself the basics of electronics and studio engineering helping his dad build a successful news service to Greek Language radio shows around the USA, on the Voice of Greece and Voice of America.

In 1987, after having moved to Philadelphia, Dino and his dad rekindled the spark that was their unique style of Greek radio programming for the Philadelphia airwaves on radio station 920 AM WTTM Trenton and ultimately moving their show to the powerhouse 800 AM WTMR Camden/Philadelphia and WJBR AM Wilmington, Delaware,

The Delaware Valley enjoyed their programming and informative broadcast so much that the listeners started encouraging them to find a way to broadcast 24/7 and 7 days per week.

As much as Dino enjoyed doing the Greek Radio broadcasts, he always had a passion to do “Top 40” radio and follow DJ’s like Terry “Motormouth” Young, Paul Barsky, Don Imus etc…

To fill the entertainment void Dino also had a passion for club/disco DJing, and he pursued it by becoming a mobile/club DJ. Dino DJ’d many venues around the Delaware Valley, such as the Pennant East, Kadilalhoppers, Degenharts, Coastline, The Indian Chief and Parx Casino Club 360 to name a few. One of Dino’s biggest breaks was when Tommy T passed the coveted torch that was Saturday nights @ Bensalem’s Michael’s Café, the hottest nightclub in the Delaware Valley as the spinner for legendary WOGL DJ Charlie Bennett on the biggest night that they started and made famous!

Dino continues his passion for entertaining as a DJ/Engineer keeping WWW.RadioEDRA.com (reincarnation of the 90’s service) on the internet, filling in for Tommy T on 92.1 FM WVLT, hosting Quizzo (Wednesday’s) and the Friday Night Dance Party at the Hollywood Tavern, 700 Huntingdon Pike, Jenkintown, PA.

If you ever get to be in the company of Tommy T & DJ Dino, make sure to have them tell you the story of how they met and the almost meetings! They will tell you a passionate and joyful story of many coincidences!