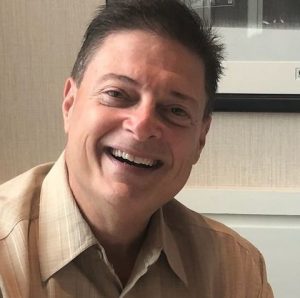 Andy Kortman was born and raised in Gloucester County, South Jersey. His first foray into the music business was in 1983, when he formed a mobile dj company, “The Sound of South Jersey,” playing weddings and parties and a number of the area’s top night spots. In 1986, Andy joined the staff of 104.9 WRDR in Egg Harbor City, NJ as their evening host, eventually moving to afternoons to replace the late Jerry Stevens (former “Wibbage Good Guy”) who had moved to middays at Trenton’s 1260 WBUD.

In 1987, Andy also moved to WBUD……again replacing Jerry Stevens, who had moved to Philadelphia’s 950 WPEN to host “The Night Train.” In 1988, Andy also joined 950 WPEN/102.9 WMGK where he served as a “swingman” and “production assistant” for both stations. During the early years of Andy’s career, he served in that capacity for a number of stations simultaneously, including Philadelphia’s KISS-100, EASY-101 and Talk Radio 96.5 WWDB as well as Bright 99.5 WJBR in Wilmington, De and Lite Rock 96.9 WFPG in Atlantic City, NJ.

In 1998, Andy returned to Egg Harbor City’s WRDR to take over morning drive. One year later, WRDR was sold, but Andy had already been asked to take over mornings at 96.9 WFPG in Atlantic City, where he remained until Dean Tyler (another “Wibbage Good Guy”) offered him his “dream job,” morning host at “The Station of the Stars,” 950 WPEN, again, a slot formerly held by Jerry Stevens.

On September 1, 2004, WPEN changed its “adult standards” format and the on-air talent was replaced. Within several weeks, Andy formed Kortair Productions, built a studio in his home and began to produce his own brokered “adult standards” and Sinatra programs to fill the void left by WPEN’s change. Andy picked up right where he left off at WPEN and successfully continued the “Andy Kortman Morning Show” for 9 years on Gloucester County’s 1360 WNJC until March of 2013, when he moved to Millville NJ’s 1240 WSNJ, taking over mornings.

In 2015, WSNJ replaced all of their hosts with a computer and an automation system. Andy, realizing that the business had forever changed, read the writing on the wall and called it a career….for a while, anyway. With the advent and proliferation of internet stations, Andy saw an opportunity to create a program playing the music he loves, specifically targeting his generation, the children of the 70s. And so, was born “Spinnin’ the 70s Sunday” which is heard Sundays from 1 pm-5pm Eastern on Famous 56 Boss Radio.

Andy now resides just outside of Atlantic City, New Jersey on a quiet island “bedroom community” called Brigantine. He enjoys classic/vintage/antique ANYTHING, from music and movies to TV shows and even cars, having recently purchased a 1930 Model A Ford Coupe. Andy is also a talented cook/baker, a weekend “gourmand” of sorts and enjoys dining out, especially lunching – and having an adult beverage – with old friends and radio colleagues Dean Tyler, Tom Moran, Mike Bowe, Dick Fennessey, Tom Lamaine, Frank Hogan and Mel Klawansky, among others. In fact, when Andy’s not working, he can usually be found at Dean Tyler’s Brigantine home enjoying an adult libation and may soon have to start paying rent. LOL.